Endorsement: Vote no on Measure A — ‘SOS’ would limit new housing 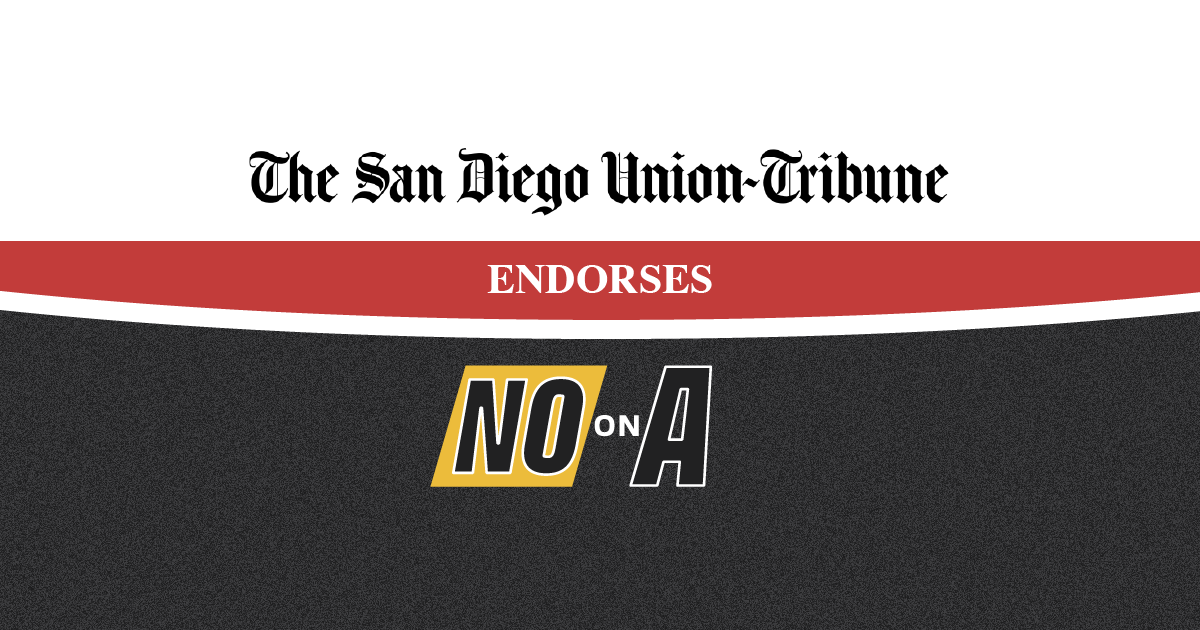 By: The San Diego Union-Tribune Editorial Board

California is facing a profound crisis because of the cost of housing. With rents for modest apartments topping $2,000 in many cities and the median cost of homes north of $550,000, it’s no wonder the ridiculous cost of a roof over one’s head has caused California to have the nation’s highest rate of poverty — and caused growing numbers of poor and middle-income residents to flee the Golden State.

The factors driving this crisis were clearly laid out in a state Legislative Analyst’s Office report in 2015. It found that the high cost of shelter was directly related to a massive shortage of housing stock, which was in turn caused by the difficulty of building new homes and apartments because of the high cost of labor and land — and the regulatory thicket homebuilders face at the local government level.

Against this backdrop, a proposal to make it harder to build housing in large parts of San Diego County would actually harm the local economy by fueling a cycle of less worker housing, higher employer costs, job losses and an exodus of firms and families.

Yes, proponents — mainly environmental groups, some union locals and the wealthy owners of the Golden Door Spa in North County — have effective arguments. They say county supervisors have a history of kowtowing to deep-pocketed developers and approving projects in remote areas with inadequate infrastructure and high fire risks. They argue that “people, not politicians” should be trusted to prevent sprawl. They say that tens of thousands of units could be added under existing zoning.

But opponents — a coalition that includes the county Democratic and Republican parties, business groups and other union locals — have stronger arguments. They say it’s not true that county supervisors were bought off by developers when they approved general plan amendments in recent years. They say projects blasted for insufficient infrastructure and fire risks have in fact been vetted and approved by county planners and fire-safety officials, respectively. They say Measure A is so far-reaching that only developers pushing mega-projects would be able to fund a ballot campaign on top of building costs — worsening the regional housing crisis.

Opponents also argue that given that Measure A exempts casinos, resorts, hotels, country clubs and factories, it’s obviously not really a benevolent attempt to protect the backcountry from overdevelopment but a political scheme to prevent projects from being built near the Golden Door Spa.

One more argument against Measure A is that it could vastly complicate the county’s ability to respond to a recent state law that requires local governments to make progress in adding housing stock or face monthly fines that start at $10,000 a month and could eventually be as much as $600,000.

Beyond that, it’s worth noting term limits and fresh perspectives at the Board of Supervisors have already overhauled a group that had too little accountability before. It’s more responsive to the public now, and besides, supervisors are elected to make decisions for constituents. Given this, it’s true that tough decisions by informed supervisors — guided by staff and a general plan years in the making that was designed with flexibility in mind — are better than countywide ballot box planning by voters who can be manipulated by misleading political ads and who may live nowhere near the affected community. A housing crisis is no time to slow growth.

But opponents’ superior case may not be enough. A 2017 LAO report about housing warned that NIMBYs’ clout would continue until more “Californians are convinced of the benefits of more home building.” Then-Legislative Analyst Mac Taylor wrote that that would require “difficult conversations led by elected officials and other community leaders.”

Has this county had enough of those conversations to overcome the populist appeal of measures like SOS? Probably not. Nevertheless, The San Diego Union-Tribune Editorial Board urges a no vote on Measure A. Its marketing blitz can’t disguise that fact that it is bad public policy.