Measure A Is Anti-Growth NIMBYism That Distracts from Real Issues

The passage of Measure A would be the most decisive land-use decision of our generation, making our regional housing crisis worse, while jeopardizing our economy, and perpetuating a carbon emission and environmental nightmare. 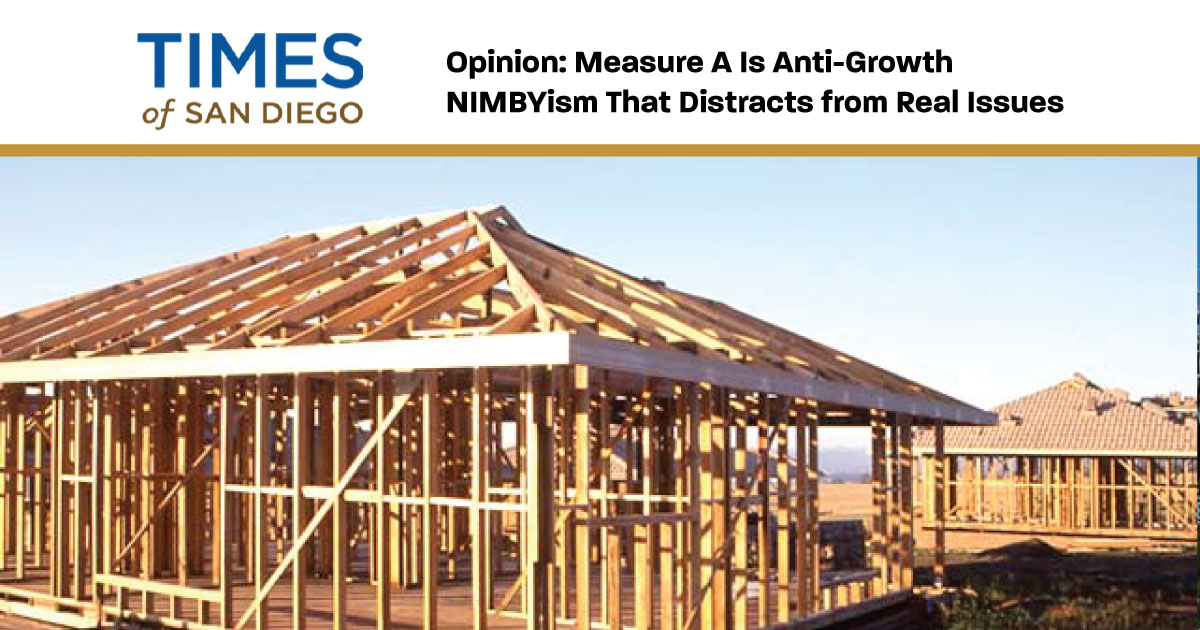 The passage of Measure A would be the most decisive land-use decision of our generation, making our regional housing crisis worse, while jeopardizing our economy, and perpetuating a carbon emission and environmental nightmare.

‍
It is a misguided proposal that is anti-environment, anti-business and anti-representative democracy. But it is decidedly pro-sprawl, pro-out-of-town-influence and pro-NIMBY.
‍
The defense offered up by the proponents seems to be based on a disdain for “urban sprawl,” whatever that is. I think they see this measure as a last line of defense against the development of master planned communities. You know, the neighborhoods, many of which begin with the word “Rancho,” where many of us live, and which have sustained San Diego’s development over the past generation.
‍
That’s not urban sprawl. Urban sprawl is a tired old term formerly used to define the construction of subdivisions without building schools, parks, sewer pipes and roads. That cannot happen in San Diego and does not happen.
‍
Instead, the proponents have a megalomaniacal disdain for growth, most visible in the development of homes. One would think they should be targeting the development of our economy — new businesses, technology clusters, the expansion of the military complex here — all of which employ more people which, in turn, induce housing demand.
‍
Or perhaps they should be targeting natural growth: more babies being born than persons dying. That is what is currently fueling the most demand for housing. Babies grow up. They fill those jobs. But just ask any CEO or small business owner. It is hard to sustain a company, much less grow it, if your employees can’t afford to live here.
And, in fact, they move away. Ask your “baby boomer” neighbor where their children are living today. You will likely either hear a story of inadequate housing, stressful commuting or plane trips to visit the grandchildren in Austin.
‍
Just ask firefighters, or schoolteachers, why they are among the 60,000 persons commuting from Riverside County to San Diego County jobs every day (a number which, incidentally, is forecasted by SANDAG to grow to over 100,000 by 2050). These commutes not only clog our freeways, they lead to significant carbon emissions.
‍
Measure A will perpetuate urban sprawl…unless the proponents are looking at our county lines as somehow being the Maginot Line which separates us from the enemy. Let’s just pretend that we are solving urban sprawl here by causing it to migrate to Temecula and Tijuana!
‍